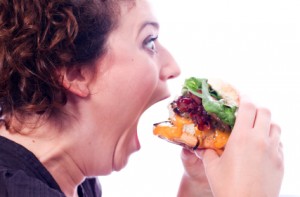 It turns out, it’s all in the brain!

This article, recently published in the IDEA Fitness Journal (a trade magazine for fitness professionals) says it all.  As obesity reaches epidemic levels in our country, neuro-imaging suggests a link between overeating and brain health.

Daniel Amen, MD, one of the worlds best known neuro-psychiatrists, has worked with tens of thousands of patients from 90 countries for more than 20 years  and has recently gathered results and insights related to the brain-fat connection ih his best selling book, The Amen Solution:  The Brain Healthy Way to Lose Weight.

Amen says, “It’s the brain that makes our eating decisions, and what we’ve found is that there isn’t just one brain pattern associated with overeating- there are at least five.  We need to match our strategies for overeating to the type of brain patterns that are affecting us the most.”

One weight-loss program will never work for everyone, because being overweight is not one thing in the brain. Through Dr. Amen’s  brain-imaging work with tens of thousands of patients.

“When I first started to do our brain imaging work at the Amen Clinics in 1991 I was looking for the ONE pattern that was associated with depression, ADD, or bipolar disorder. But as I soon discovered, there was clearly not one brain pattern associated with any of these illnesses. They all had multiple types. Of course, I then realized, there will never be just one pattern for depression, because not all depressed people are the same. Some are withdrawn, others are angry and still others are anxious or obsessive. The scans helped me understand the type of depression, or ADD, or bipolar disorder a person had, so that I could better target their treatment.

This one idea led to a dramatic breakthrough in my own personal effectiveness with patients and it opened up a new world of understanding and hope for the thousands of people who have come to the Amen Clinics and the millions of people who have read my books.

As we looked at the brains of our overweight patients, we discovered that again there was NOT ONE brain pattern associated with being overweight, there were at least five. We saw patterns associated with brains that tended to be compulsive … some were impulsive … others were sad … and still others anxious … in various combinations. This is exactly the reason why most diets don’t work. They take a one-size-fits-all approach, which from our brain imaging work makes absolutely no sense at all.

Here are the five types I talk about at length in my new book. As we will see, most people will never need a brain scan to know their type.

Type 1: The Compulsive Overeater: These are people who think about food all day long. The most common brain SPECT finding in this type is increased anterior cingulate gyrus activity, which is most commonly caused by low brain serotonin levels. High-protein, low-carbohydrate diets usually make this type worse and can make them irritable and emotional. Diet pills make them anxious. A higher-carbohydrate diet and the supplement 5-HTP boost serotonin and can help this type stop getting stuck on thoughts about food.

Type 2: The Impulse Overeater: I call them grabbers — whenever they walk past something they grab it. These are the people who wake up with the best intentions to eat well but simply can’t resist when they drive past the doughnut shop. This type results from too little activity in the brain’s prefrontal cortex, likely due to low levels of dopamine. High-carbohydrate, low-protein diets typically make impulsivity worse, practically ensuring that these dieters will fail. Boosting protein intake and drinking green tea can increase dopamine to give you better control of your impulses.

Type 3: The Impulsive-Compulsive Overeater: A combination of type 1 and type 2, they have very little control over their impulses and tend to get stuck on thoughts about food. These people typically have both high activity in the anterior cingulate gyrus (low serotonin) and low activity in the prefrontal cortex (low dopamine). Using serotonin-boosting interventions alone helps calm compulsive eating but increases impulsivity. Trying dopamine-boosting interventions alone lessen impulsivity but worsens compulsive eating. These people need a combination approach that raises both serotonin and dopamine, such as green tea and 5-HTP.

Type 4: The Sad Overeater: These are people who tend to be sad or depressed — they eat as a way to medicate underlying feelings of sadness, depression, loneliness, or boredom. High activity in the deep limbic system is associated with this type. Exercise, focusing on the things you are grateful for, and getting rid of the ANTs (automatic negative thoughts) that steal your happiness can calm this brain region and reduce the desire to eat when sad.

Type 5: The Anxious Overeater: These are people who tend to be filled with anxiety and tension — they eat as a way to medicate their anxiety. Brain scans show that high activity in the basal ganglia, likely due to low levels of the calming neurotransmitter GABA, is the common finding in this type. Boosting GABA with relaxation exercises and a combination of vitamin B6, magnesium, and GABA can reduce feelings of anxiety.

Not only can your brain help you determine the best way for you to lose weight, but shedding those pounds can also have a positive effect on your brain. A University of Pittsburgh study found that as weight goes up, the actual physical size of the brain goes down. Obese people had 8 percent less brain tissue and their brains looked 16 years older than lean people. Being overweight also doubles your risk for Alzheimer’s disease.

Being obese is a life-threatening condition, and it needs to be taken seriously. Getting on the right plan for your brain can help you lose weight and be healthier for the rest of your life.

Read more about this fascinating research at amenclinics.com and call us for more information on getting the tools and support you need to lose weight once and for all in our T School program.    Because when you change your mind, you can also change your body!  913 499 7510.